The daguerreotype of Henrik August Almqvist was taken in 1850 in Fiskars. Photo: Fredrik Rehnström / Picture Collections of the Finnish Heritage Agency (HK19671129:90)

Red has been added on the cheeks of the people in daguerreotypes from the 1800s.

The collections of the Finnish Heritage Agency include a few coloured daguerreotypes. The picture of Marie von Salza und Lichtenau taken in 1852 in Dresden, Germany, is in its original frame and the whole image field is in colour. Another example of a skilfully coloured daguerreotype was taken by Fredrik Rehnström in Fiskars on 11 September 1850. In the image, the face and hands of Henrik August Almqvist have been coloured very naturally.
Marie (Mary) von Salza und Lichtenau (née Tunder) was a member of a noble family who may have been born in St. Petersburg in 1836. She married the German Hermann von Salza und Lichtenau and lived in Dresden afterwards. Rehnström’s model, Henrik August Almqvist (1806–1887), worked as a bookkeeper at the Fiskars ironworks. Fredrik Rehnström is the best known among the Finnish daguerreotypists, and he was a respected photographer already in his own time.

The base material of a daguerreotype is a copper plate with a thin layer of silver on the surface. Daguerreotypes were made by exposing them directly in the camera, which means that there are no copies of the image and it is always a mirror image of its subject. The image is in black and white, and it has a reflective surface. Daguerreotypes are negatives, but when viewed from the right angle, they appear as positive images. The surface of the image consists of tiny silver crystals, which means that it cannot be grainy. The exposed image plate was developed using mercury vapour. Making the images was both dangerous and expensive.

The collections of the Finnish Heritage Agency include a total of 86 daguerreotypes that come from several donors. All images in the collections are portraits. Some landscapes also exist in Finland. However, due to the long exposure time and the cost of the image, most of the daguerreotypes are portraits of wealthy people.
The details of a portrait were sometimes enhanced by adding colours afterwards. Accents were included by adding gold paint on the details of the dress or on the jewellery, for example. Sometimes, a bit of red has been added to the cheeks of the portraits. Adding colour into the image was delicate work. A mixture of colour pigment and gum arabic was dropped onto the image. After this, the colourist blew gently on the image, which fixed the colour on the surface of the image due to the moisture in the breath.
All daguerreotypes in the Picture Collections of the Finnish Heritage Agency and the National Museum of Finland have been digitised and published in the Daguerreobase database, www.daguerrobase.org, as well as in the Finna online service, www.finna.fi. 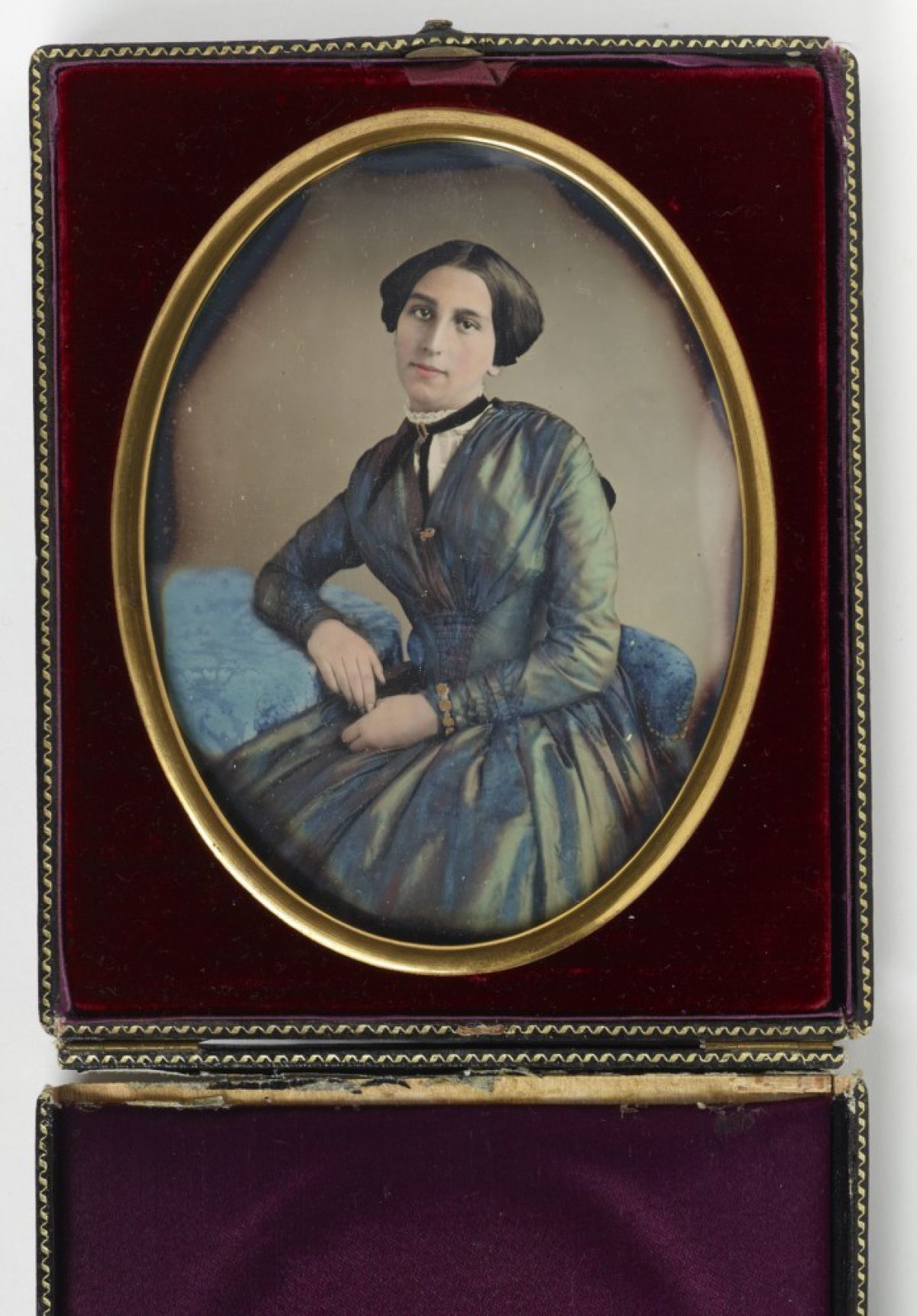