The two female photographers of Itä-Häme were a notable exception at the time.

The open window carries the strong scent of freshly-cut hay, midsummer roses and manure into the cottage. An old man is sitting on the bench in front of the window with a wide smile on his face. His wife, who is wearing a scarf on her head, is gesticulating and explaining something.
There are fishing nets hanging on the walls, a knife next to the window, and you can see the sunny yard behind the potted plants. The old photograph tells a wealth of stories.

The picture in question was found in a worn-out photo album that the newspaper Itä-Häme donated to the Finnish Heritage Agency’s Journalistic Picture Archive in 2016, along with its collection of negatives. The newspaper’s 12 albums include published photographs and newspaper articles from the early 1960s.
The newspaper article accompanying the photo reveals that the cheerful old man is the master of the house himself, nearly 80-year-old Juho Onali, from the Onali house in the village of Onali in Onalinsalmi. Sitting next to him is his wife Aino. It is midsummer 1963.
Itä-Häme published “a series of writeups from those beautiful regions dotted by lakes where people still, despite road connections, live in peace and quiet, undisturbed by the restless lifestyles of more populated areas.”

The village features written over the summer were published under the pseudonyms Pola and Topa. The person behind Pola was journalist and author Arvo Kippola. Her teammate in summery Finland, Topa, was photographer Toini Mesiäinen.
Toini’s father was K. O. Kivekäs, the owner of Esan Kirjapaino, the publisher of the Itä-Häme newspaper, while her husband was K. T. Mesiäinen, the newspaper’s editor. Initially, Toini worked for the newspaper as a driver, as the family used their own car to chase stories.
However, Toini was also interested in photography, and so the driver soon became a press photographer as well. In her pictures, Toini recorded villages, farms and houses on both sides of Onalinsalmi in Hartola, Joutsa, Heinola, Asikkalaa and Sysmä, the same places where Itä-Häme had been read for 90 years. Initially the newspaper was only published on Thursdays, during which time the paper attracted nearly 3,000 readers. Nowadays Itä-Häme is published six times a week and has a readership of 20,000.
The newspaper gained its own dark room and printing plate maker in the early 1960s. Toini was also skilled in making printing plates out of photographs, which was how pictures were printed in newspapers at the time. Toini’s job was eventually taken over by Anja Halla, who worked as a full-time photographer for Itä-Häme from 1963 to 1998. In other words, this small local newspaper hired not one but two female photographers in a time when there were hardly any around at all!

The Itä-Häme photo negative collection donated to JOKA contains newspaper photographs from the 1950s to the beginning of the 2000s. The newspaper’s old photographs have recorded a great deal of local history and people’s everyday lives.
The photographs feature both Hartolan Suksi ski factory and Heinolan kaira auger factory, and they showcase the bus drivers’ strike, the agriculture and forestry fair of the Joutsa region, the wrestling competition Heinolan Isku, a giant rock formation in Paistjärvi and a children’s summer camp at Kukonnotko. In its very first issue, published on 8 December 1927, Itä-Häme demanded that “correspondents should supply local, fresh and truthful news.”
In honour of the 90th anniversary of Itä-Häme, JOKA has collaborated with the paper to organise an exhibition in the Finnish Heritage Agency’s library in Helsinki, consisting of pictures from the Itä-Häme collection. 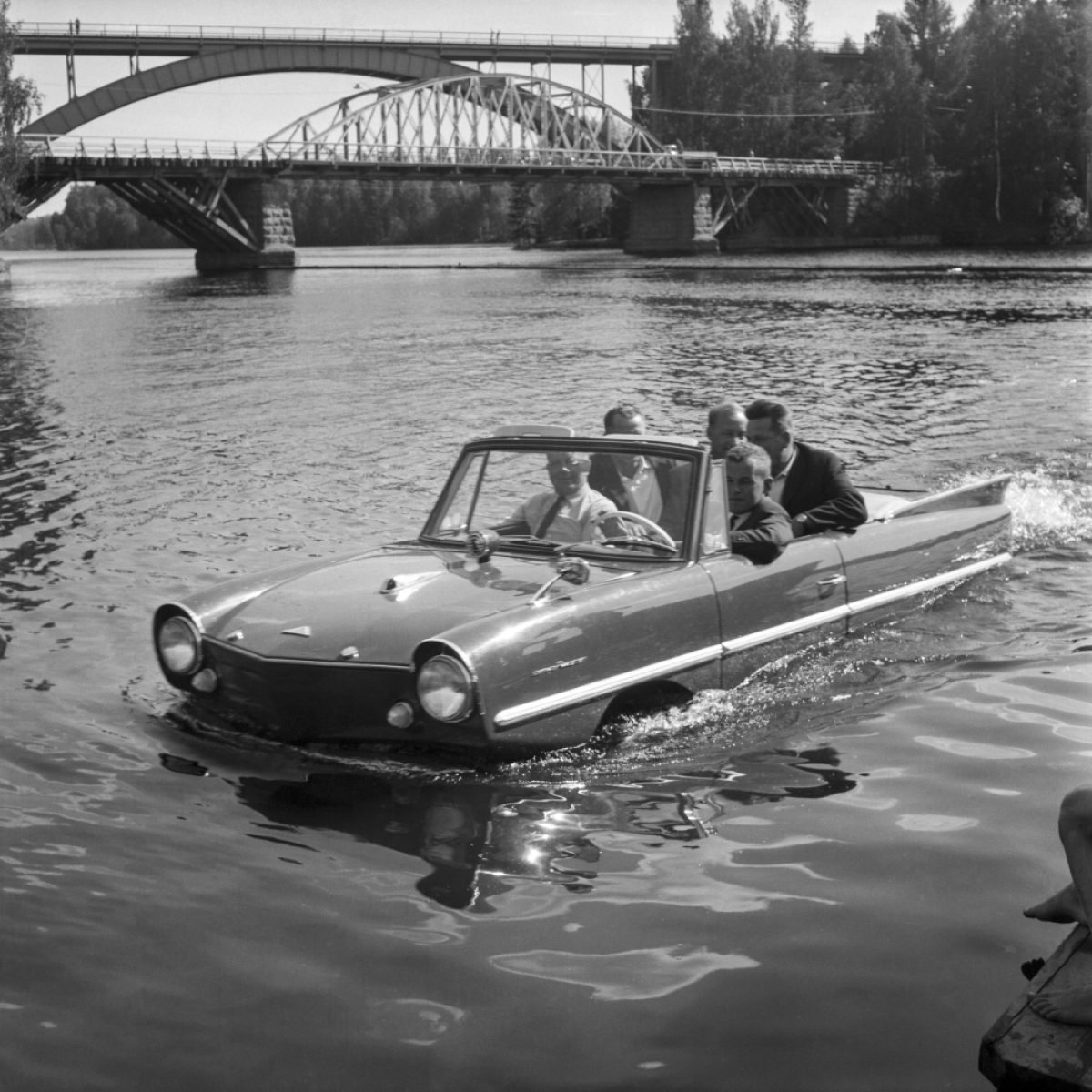 An amphibious car in the Jyränkö stream in Heinola on 6 July 1963. The Amphicar boasted a top speed of 14 km/h in water and 100 km/h on the road. The people on board remained perfectly dry. Photo: Itä-Häme / JOKA / Finnish Heritage Agency (JOKAIH2J04:1)