An evacuation load is being packed in Kurkijoki, 1944. Photo: Pekka Kyytinen / Picture Collections of the Finnish Heritage Agency (KK5596:29.SJ.52)

Leaving for a new beginning

Pekka Kyytinen photographed the travel of Karelian evacuees in the 1940s.

It is 1944. At the courtyard of a house in Kurkijoki in Ladoga Karelia, the women and children are resolutely packing a load for evacuation. Their departure is a result of the events of the war in 1944. Already during the summer, some of the population of Karelia had been forced to relocate to the western parts of the country due to a large-scale offensive by the Soviet troops. In September, after an armistice between Finland and the Soviet Union, Karelia was to be handed over to Russia and the area had to be evacuated completely. The situation was nothing new to the Karelian people, because they had already had to be evacuated once due to the Winter War. When the Continuation War started, it sparked hopes for a return, and the Karelian people started their journey back to their homes in the autumn of 1941. But just when they had managed to get the life at home in Karelia back in order, they were forced to leave again. This is what you can see in the picture.
Even though the evacuation in 1944 felt even more bitter than before, it was much more organised than the last time. The elderly people and children were the first to be relocated in the evacuations from Kurkijoki in September. The women driving the cattle and other people able to work remained to take care of the harvest at a brisk pace. By 24:00 on 21 September 1944, Kurkijoki was empty. In total, approximately 407,000 Karelian people living in the area handed over to the Soviet Union had to leave their homes due to the Winter War and the Continuation War.

The man behind the photographs of the fateful hours of the Karelian people is the photographer Pekka Kyytinen, M.A. (1906–1974). He was from Särkijärvi, Kurkijoki in Karelia, and cherishing the traditions and his Karelian origins were important themes that traverse his career. The photographer, who was involved in many and varied events, was also an editor and an author, among other things. The subjects of Kyytinen’s photography were not limited to only Karelian people; his subjects varied from the high and mighty of Finland to ordinary people carrying out everyday chores.
In one of the photographs of Lankinen, the Karelian farmer Topias Lankinen from Alho, Kurkijoki, is building a house in Mellilä in the winter of 1947. In the open scenery on the background, you can also see other resettlement plots in the village. The theme of new beginnings and the pioneer ethos were strongly highlighted in the post-war imagery. Settling the displaced population in addition to other groups, such as veterans, was one of the key challenges for Finland at the time. Some of the displaced Karelian population settled in cities and in industrial jobs. The journey of the agricultural community to a new home was long for many people, and the displaced Karelian people sometimes had to stay at several places before settling on a farm of their own. After the Land Acquisition Act of 1945, various kinds of farms were established for the displaced population. In their new dwelling places, the displaced Karelian people were faced with clearance and construction work.

The Picture Collections of the Finnish Heritage Agency include an estimated 50,000 photographs by Pekka Kyytinen. Kyytinen’s negatives have been reviewed and digitised over the past year as a part of the rescue digitisation project for pictures at risk of destruction. You can view Kyytinen’s photographs via the Kuvakokoelmat.fi service of the Finnish Heritage Agency. 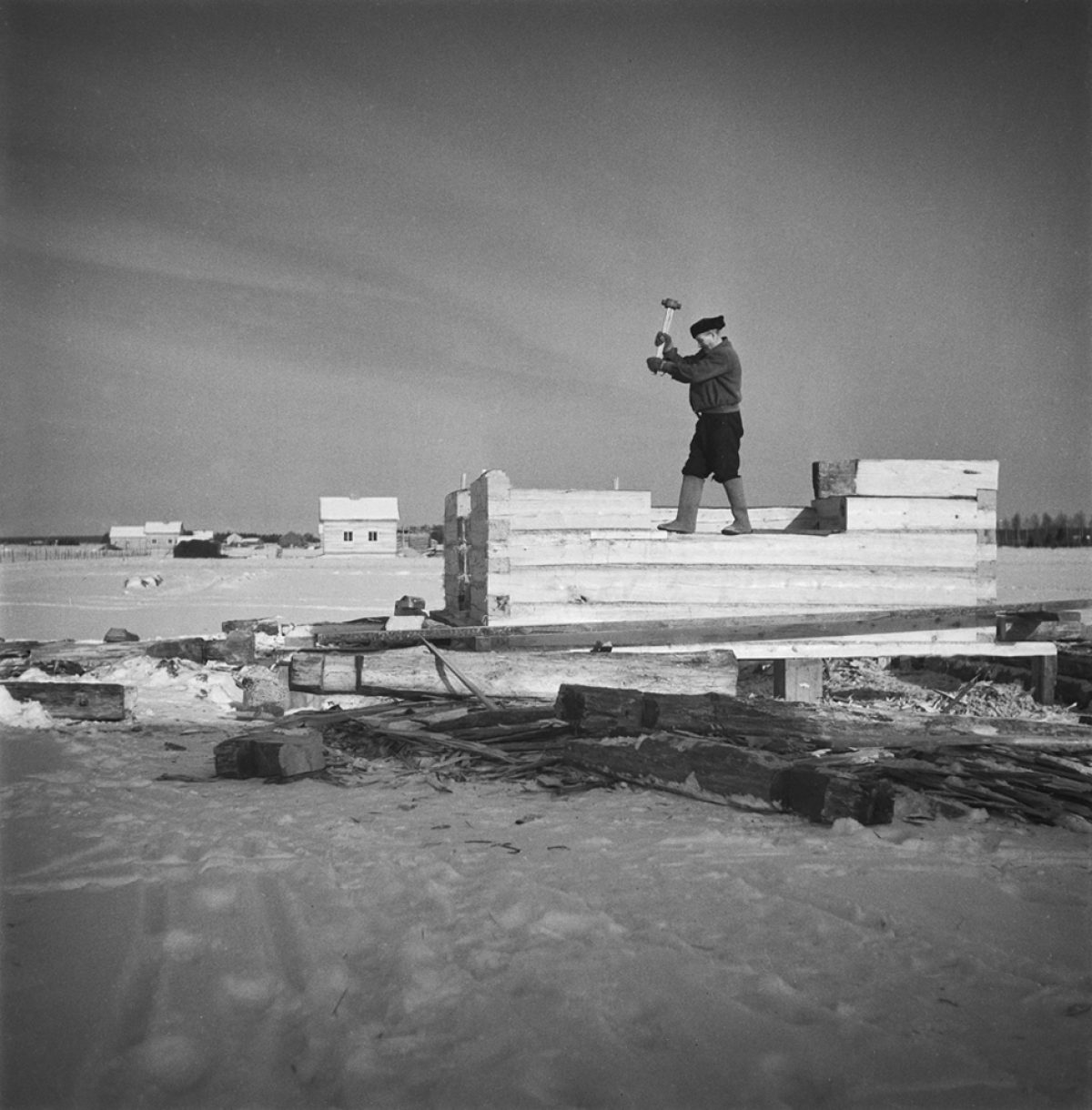 A building rises on a farm in Mellilä in the winter of 1947. Photo: Pekka Kyytinen / Picture Collections of the Finnish Heritage Agency (KK5596:26.RT.139)