Helge Heinonen took his camera to the 1972 Lumberjacks' Culture Days.

With light feet and a firm hold, a lumberjack is leading his partner in the rhythms of jenkka. The rim of his hat has been pulled down deep, and his face is solemn with concentration. The woman has a chiffon scarf around her neck, her handbag is swinging and the hem of her coat is swaying as they dance. The photograph was taken at the opening dance of the Lumberjacks' Culture Days in Viitasaari market on 16 June 1972.
Timo Saari bought around sixty photographs from a flea market, one of which was this dance picture. Photographer Helge Heinonen from the magazine Apu had taken them during the event in Viitasaari. Saari donated the photographs to the Finnish Press Photo Archive JOKA, which already had an existing collection of Helge Heinonen's journalistic pictures.

The first Lumberjacks' Culture Days were held in Joensuu in 1967, the second in Rovaniemi in 1968, the third in Kajaani in 1970 and the fourth in Viitasaari in June 1972. Viitasaari is located right at the heart of Finland, on the shores of Lake Keitele. The waterways in the area were used for log driving as early as the 18th century.
Originally, the idea for the culture days came from Työväen Sivistysliitto, an organisation promoting education and culture amongst workers, but the forestry workers' foundation Metsämiesten Säätiö and forestry sector employers took part in organising the event as well. The aim was to increase the public's appreciation of forestry workers' and lumberjacks' work in a laidback and humorous way. ‘The organisers wanted to add a hint of resin and sweat to the otherwise pervasive fragrance of perfume wafting around culture,’ wrote Työväen Sivistysliitto's magazine Aikamerkki.
The three-day event included a timber rafting competition, a forestry work demonstration and forestry sector meetings. An evening party was held on a beach, and musician Esa Pakarinen entertained people at the dance pavilion in Hännisalmi.
Plays were performed at the Sports Hall, and a choir sang songs. Musician Tapio Rautavaara was amongst the highlights of the main event on Sunday.
The local newspaper estimated that the event had attracted a total of 15,000 visitors to the small municipality of Viitasaari. A group of 74 people had come from Vuoksenniskan Kotien Puolesta organisation and Työväen Sivistysliitto's branch in Imatra, the newspaper reported.

Helge Heinonen took some photographs of the official entertainment as well, but most of his pictures are of the attendees. Men in tracksuit tops and terylene, one wearing a cap, another a beret and the third a trilby. Women in flower-patterned dresses, grannies with scarfs on their heads and children running around everywhere. What a grand event!
Heinonen captured a piece of sweet Finnish summer in his picture. People have switched off from work mode and might start to sway and stumble a bit. Someone has lost their balance and is sitting on the ground, another is sleeping on the grass in a park, tired from all the culture.

Forest work and log driving provided a large number of jobs in Viitasaari from the 1870s all the way to the 1960s. As the road network and lorry technology improved, timber began to be transported on land. The last logs were driven down the Huopanankoski rapids in Viitasaari in summer 1966, and the last remaining channels along the Viitasaari route were dismantled in the 1990s.
The last Lumberjacks' Culture Days were held in Valkeakoski in 2000. ‘The world had moved on, or rather, the lumberjacks had disappeared,’ wrote Esko Pakkanen in his book Metsäherrojen mennyt aika. 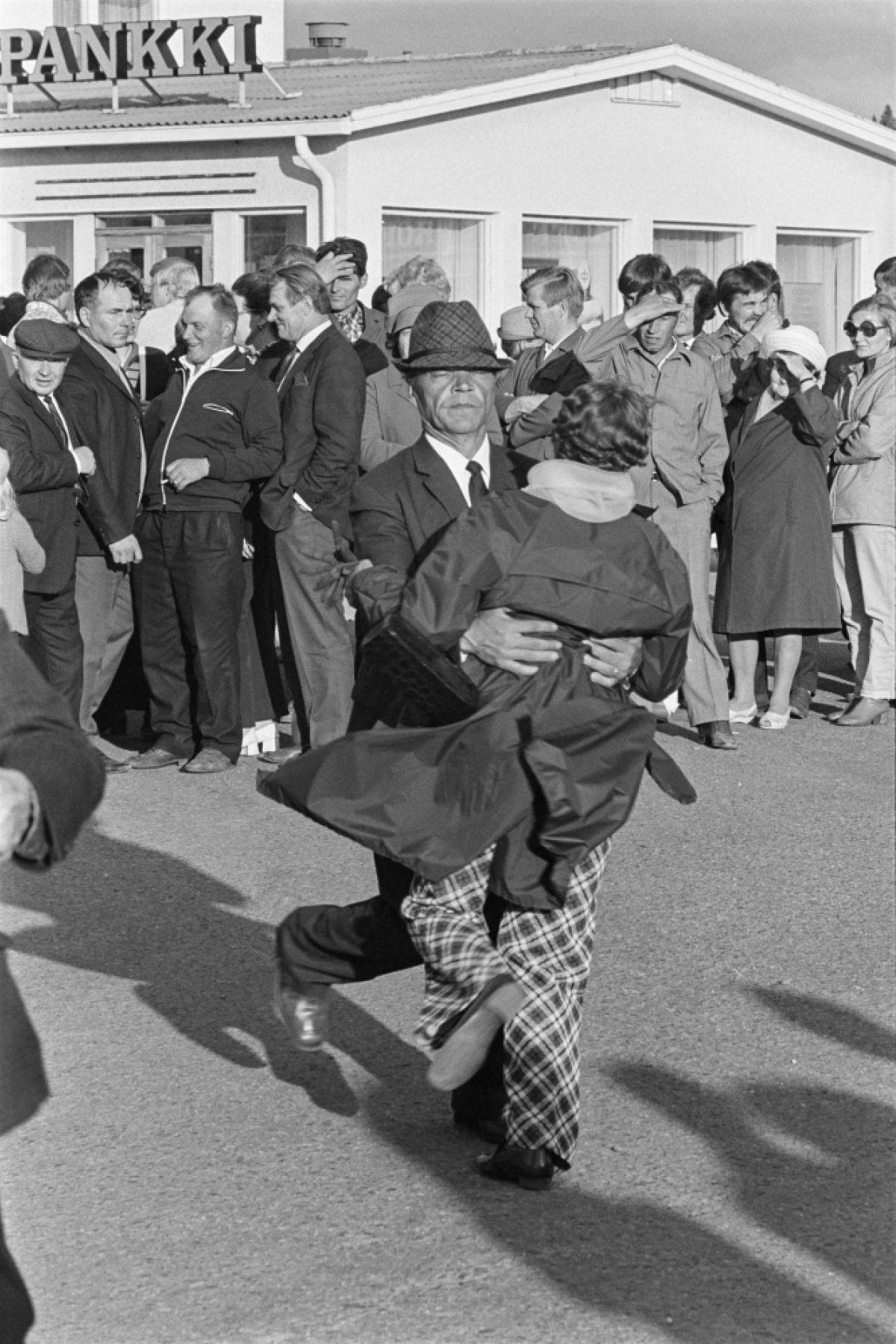