The intensely atmospheric photographs taken by Ahti Rytkönen supplemented the gathering of vocabulary.

The well-known oil painting Under the Yoke (Burning the Brushwood), painted in 1893 by the artist Eero Järnefelt, depicts slash-and-burn agriculture against the backdrop of a hilly landscape in Eastern Finland. The same subject matter was documented 35 years later by teacher Ahti Rytkönen in his impressive black-and-white photographs. Rytkönen’s series of photographs of slash-and-burn agriculture were taken in Savola, Tuovilanlahti, Maaninka, in 1928.
The slash-and-burn farmers are moving tree trunks around the burning field with long wooden rods. The air is hot and smells of smoke. Black stumps rise from the ground. The greenery of early summer farther away in the background gives the photograph a unique atmosphere.

Slash-and-burn agriculture was hard work. In Savo, it was referred to as ‘roasting meat in a rag’. Ahti Rytkönen described slash-and-burn agriculture in Savola in great detail in his book Tuulastulilta ja karhumailta (Of Torch Fishing Lights and Bear Hunting Grounds, 1935).
Rytkönen was known as a wordsmith. Among other things, he describes how the workers had to know to sow flax in the burnt ground so densely that a bed bug could step from one seed onto another. Or how a worker sowing turnips had to slurp down their gruel from a bowl in the evening because their lips could not stand the touch of a spoon after spending the day spitting out turnip seeds while sowing.
Rytkönen also worked as an expert in three films produced about slash-and-burn agriculture by Kansatieteellinen Filmi (Ethnological Film Ltd). The films Kaskisavun mailta (Smoke-covered Swiddens) and Kaskinauris (Slash-and-burn Cultivation of Turnips) were filmed in 1937 and Sienanpoltto (Log Burning) in 1938. Rytkönen arranged the filming locations, hired the performers and arranged the shooting times. All three films were filmed by Eino Mäkinen.

Rytkönen had taught himself photography independently. He photographed the everyday lives of people across Finland.
For the period 1924-1933, Rytkönen held a scholarship granted by Sanakirjasäätiö (the Dictionary Foundation). He collected materials for the planned dictionary of Finnish vernacular in Northern Savo and Kainuu, and he also took photographs during these travels.
Rytkönen justified the purchase of a camera to the representatives of Sanakirjasäätiö by stating that ‘many dialect words and words that describe different work practices are almost impossible to explain with words’. Rytkönen successfully took many series of photographs of different work phases with his camera. The first series of photographs he took was about making a woodchip basket.
He always had his photography equipment with him when he travelled, and the photographs were developed on location in easily darkened rooms, such as drying barns, potato cellars and saunas. Rytkönen captured his first colour photographs on glass plates in the 1930s.

Ahti Rytkönen (1899-1989) was a primary school teacher who graduated with a Master of Arts degree in 1924. He worked as a lecturer in Finnish at Jyväskylä College of Education for the period 1938-1965 and was granted the title of professor in 1964.
Rytkönen wrote numerous articles on linguistics and ethnology as well as descriptions of the life of the people of Northern Savo. 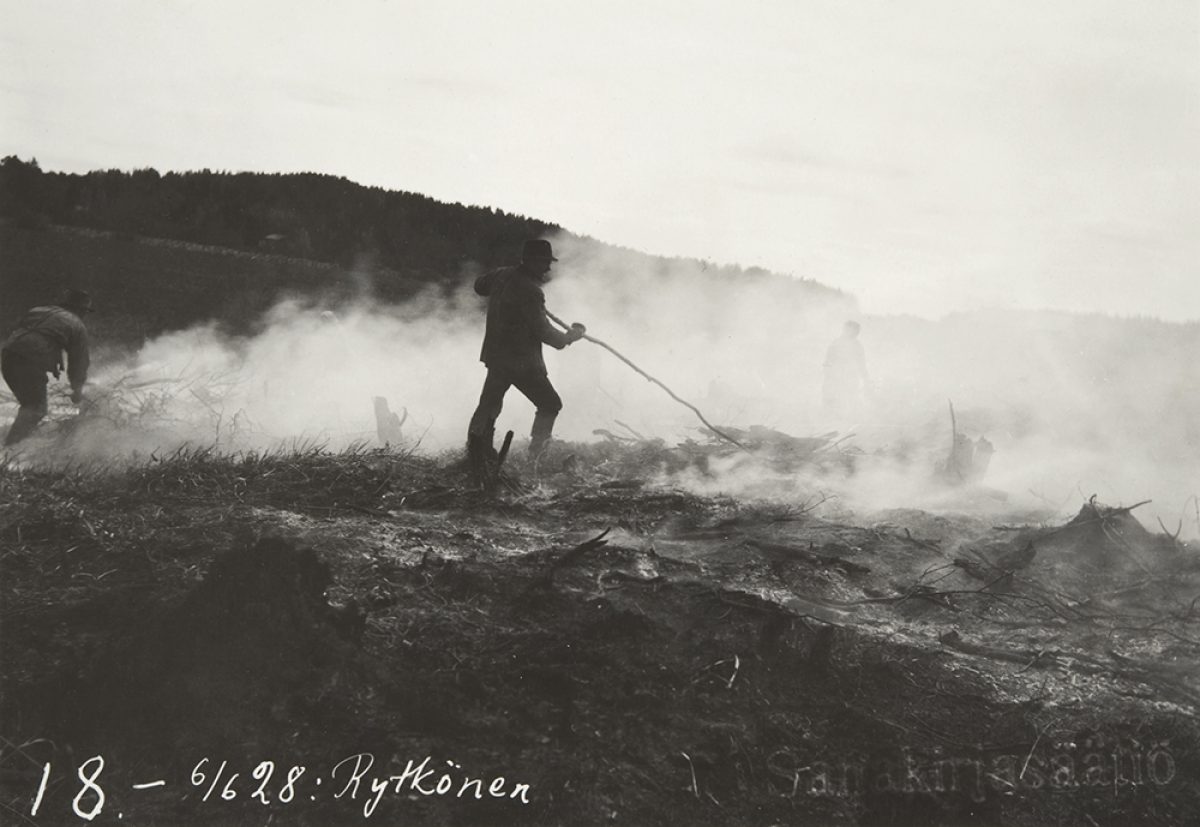