In 1975, press photographers in Helsinki were kept busy by the Conference on Security and Cooperation in Europe (CSCE).

The Final Act of the Conference on Security and Cooperation in Europe (CSCE) was completed but for the signatures in Geneva in mid-July 1975. Finland had two weeks to prepare for a historical meeting, in which state leaders would gather from all over Europe, as well as the USA and Canada. For the CSCE, the news photograph office Pressfoto established the PF team, which included the press photographers Christian Westerback, Zacharias Johansson, Heikki Kotilainen, Leif Weckström, Kai Hagström and Lauri Kautia. They photographed the preparations, the progress of the conference, the meetings between the heads of state and the programme of the ladies. CSCE photographs left Helsinki by buses, trains and aeroplanes for country newspapers. Foreign photo agencies were also interested in the photographs.

The security measures left nothing to chance. Police officers were brought in from the provinces. Armed soldiers were standing on the roof of the hotel Hesperia and in the crossroads on the way to the airport. A military armoured car stood waiting at Seutula airport. There were also foreign security guards present. Johansson says that they should not have been taking photographs of the snipers, and it resulted in a complaint. The conference itself was held in Finlandia Hall. A wire-netting fence was erected around the building, and the political cartoonist Kari Suomalainen nicknamed the fence as “President Kekkonen’s fish trap.” The Töölö goods station and railway tracks were dismantled and a car park was built in their place. A long stretch of the Mannerheimintie Street was closed. The National Museum of Finland was closed during the three-day meeting. “The rubbish and the homeless drunks were cleared out of Helsinki,” Kotilainen says. Finland put her best foot forward.
The Pressfoto photographers remember Helsinki as being “in a complete state of madness”. Buses ran at random. Black cars took visitors to meetings and dinners around Helsinki. Reporter Maarit Tyrkkö (now Huovinen) and director Mikko Niskanen were present at a garden party held in honour of the visitors at Kalastajatorppa. The summer weather favoured the partygoers. In the photograph, Tyrkkö is holding a tape recorder. She was writing a story for the Suomen Kuvalehti magazine, in which she was a reporter. In her book ‘Tyttö ja nauhuri’ (A girl and her tape recorder), she tells that she spent a lot of time with President Urho Kekkonen in 1975. Tyrkkö was involved in the official events, but she also spent her free time with the President. The director Mikko Niskanen has a camera. He was filming material for a documentary on the CSCE. The film ‘ETYK – päämääränä rauha’ (CSCE – objective peace) was completed in 1980 and it won the documentary competition at the Moscow International Film Festival the next year.
The General Secretary of the Central committee of the Communist Party of the Soviet Union Leonid Brežnev appears in the film by Niskanen; President Kekkonen also met Brežnev alone during the CSCE. In the photograph, Brežnev is in a good mood. The Helsinki Spirit was in the air.
The leaders of 35 states signed the Helsinki Accords on the last day of the conference. “The whole of Finland was incredibly chuffed,” Kotilainen describes the events. It was time to go home. The Finlandia Hall emptied out. Only papers were left drifting down on the floor. 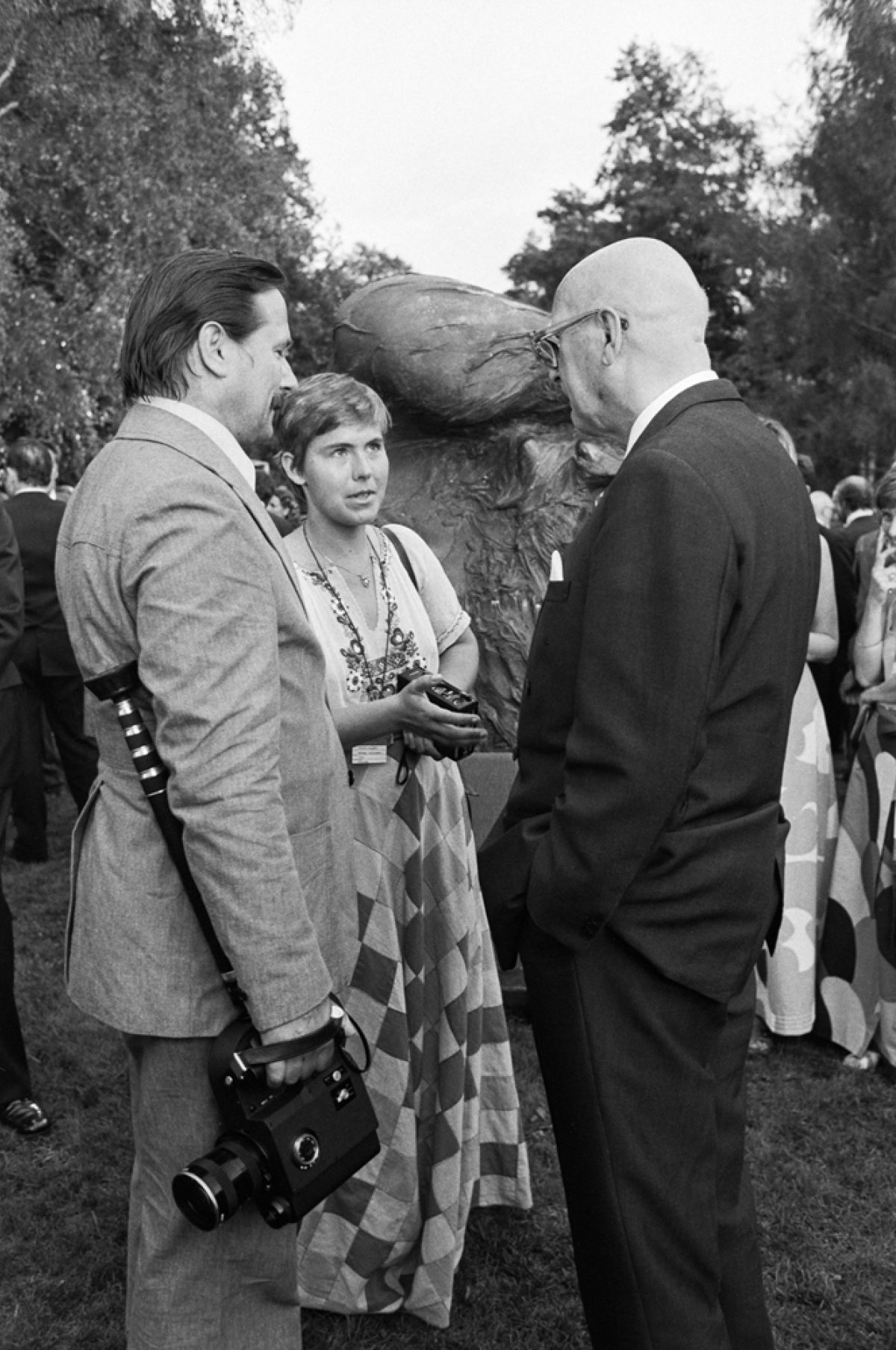 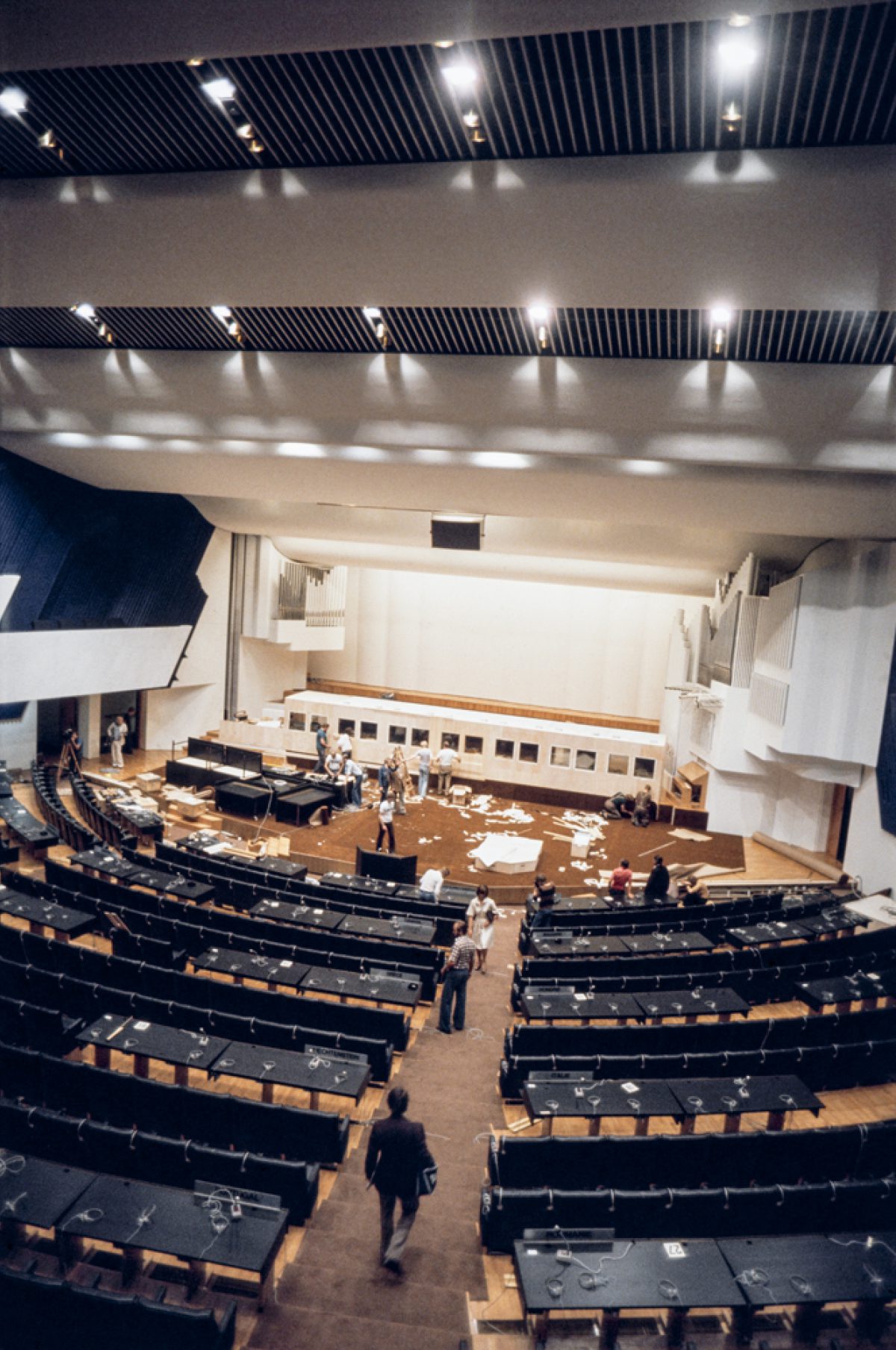 The Helsinki Final Act, the final document of CSCE, has been signed on 1 August 1975. The conference is over. Photo: PF-team / Pressfoto Zeeland / JOKA / The Finnish Heritage Agency (JOKAPF3AiD02:4)