Children eating turnips in Tietävälä, Kirvu, in the early 20th century. Photo: Liina Cantell / Collection of the Karelian student nation at the University of Helsinki / Picture Collections of the Finnish Heritage Agency (KK4878:271)

The travels of a village photographer

It is a warm day in late summer, sometime in the early 20th century in the village of Tietävälä. Children are sitting on the steps, concentrated on peeling and eating turnips. Only one little girl looks boldly into the camera.

The picture was taken by Liina Cantell. She used to spend her summers with her relatives at the Uussija farm and take photographs of the people of Tietävälä and life in Kirvu.
Liina Cantell was an alias used by Gustava Karoliina Cantell (née Mykrä). She was born in Saint Petersburg on 17 May 1866 and married station manager Johan Gabriel Cantell.
Liina Cantell was a village photographer. They were people who, alongside their actual trades and professions, were keen on photography and took pictures around the countryside in the late 19th century and early 20th century. Few of them were women. The average village photographer was a youngish man, interested in new technical equipment.

In 1888, Cantell graduated as a teacher from Kymölä teacher training college in Sortavala. Her education might partly explain her fascination with technological innovations. As the wife of a station manager, she was surrounded by new passenger transport technology. Railway lines were being built, and the new era arrived in towns and villages accompanied by the whistles of steam locomotives.
In the early 20th century, the photographer documented the villages and countryfolk in Kirvu and the rural municipality of Sortavala. At the time, life was still fairly similar regardless of the location and based on traditions and old customs. Liina Cantell's husband was appointed as the station manager of Kaltimo, Eno, in 1919, and the family moved from Sortavala to Northern Karelia. Liina Cantell died in Kuopio on 23 October 1945.

Her photograph, ‘An evening by the river Helisevä in Kirvu’ was published in the Christmas magazine Joulutunnelma in 1914. Gradually, photographs began appearing in newspapers and magazines, initially as engravings. The newspaper Helsingin Sanomat published its first print photograph in 1904.
Cantell successfully took part in several photography competitions. In 1911, she won 50 marks in a competition held by the Finnish Tourist Association. In the Maailma magazine's 1921 photography competition under the theme ‘Finnish summertime nature’, she won first prize (500 marks) with her picture series. Russian cavalry officer and the adjutant to the Governor-General, Ivan Timiriasev, came second.
The Maailma magazine wrote an article about the competition: ‘...none of the photographs were from western Finland, and few were from the central regions. It is true that the eastern regions have more to offer for nature lovers... Sunny vistas are abundant in the extensive picture collection of Liina Cantell, wife of a station manager.’ In a competition organised by the magazine Kotiliesi in 1925, she won second prize and books worth 40 marks with her photographs titled ‘Making coffee’, ‘In a hayfield’ and ‘Laundry day’ under the pseudonym Heinäsirkka, i.e. ‘Cricket’. 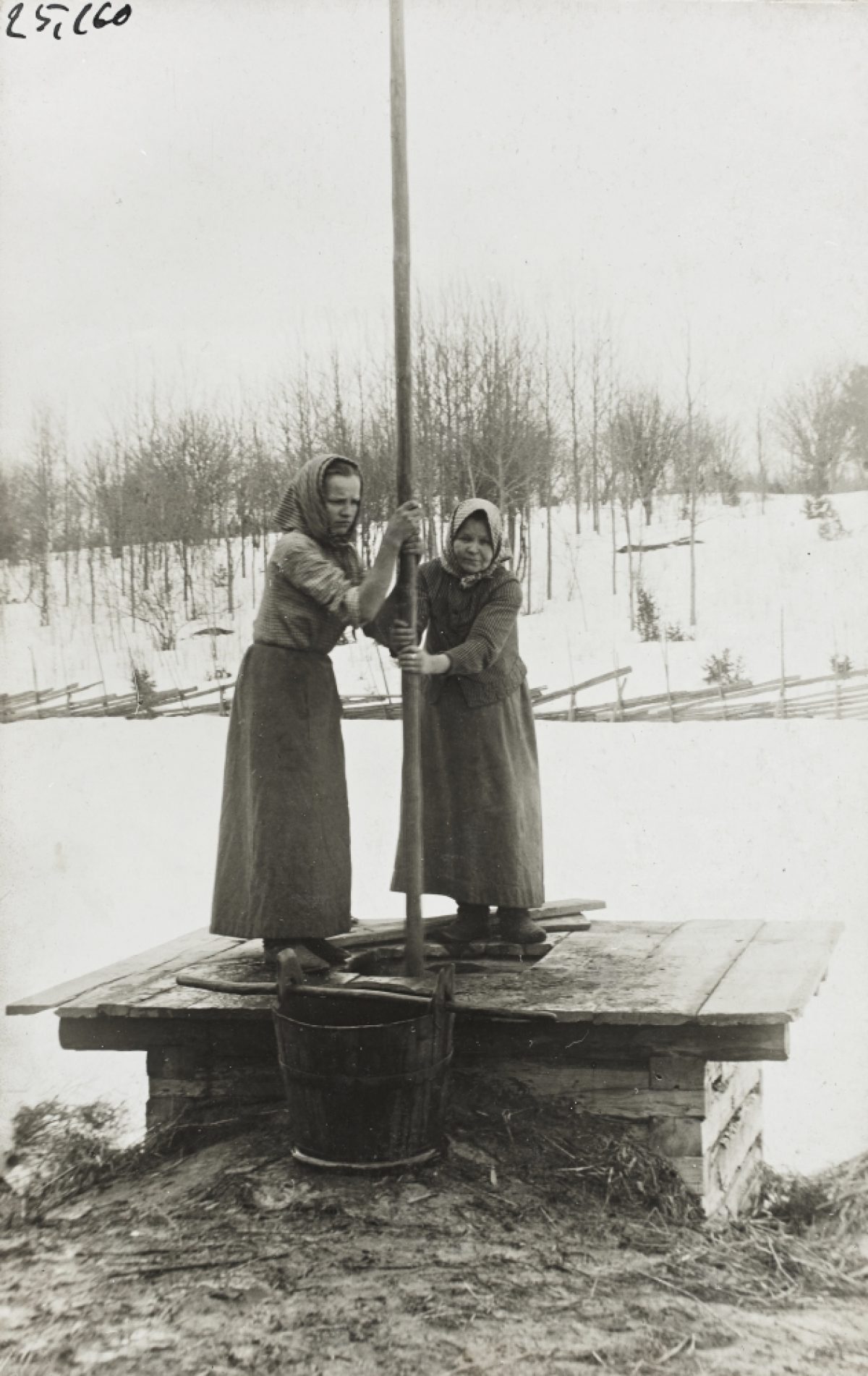 Women lifting water up from a well into a bucket in Airanne village, in the rural municipality of Sortavala, in the early 20th century. Photo: Liina Cantell / Collection of the Karelian student nation at the University of Helsinki / Picture Collections of the Finnish Heritage Agency (KK4878:846)