Prince Abdullah of Jordan (on the left) and Prince Albert of Monaco received Peltonen skis and birch-bark horns as gifts on their visit to Vuorenkylä on 26 August 1988 The Municipal Manager of Hartola, Taisto Pölkki (second from the right), is giving a speech to the royal guests (cropped image). Photo: Anja Halla / Itä-Häme / Press Photo Archive JOKA (JOKAIH3D8:3).

Princes in the Kingdom of Hartola in 1988

A large crowd has gathered to Purri House, or Olkkola House, in the village of Vuorenkylä. The door to the large building is wide open, inviting visitors in. A banquet table has been set up in the yard, and people are queuing for salmon soup. The sun is shining. This is a summer festival in the Kingdom of Hartola.

In 1784, King Gustav III of Sweden named Hartola as the signature town of crown prince Gustav Adolf. This is the basis for Hartola’s Swedish name, Gustav Adolfs, which the locals started calling Kustavus. However, the age-old name ‘Hartola’ was not forgotten, and, as such, on 10 November 1987 the town’s leaders announced that Hartola was a kingdom.

The guests have finished eating salmon soup and drinking champagne. It is time for a speech. Taisto Pölkki, Municipal Manager of Hartola, shuffles his papers and starts his speech. Cheerful guests of honour are listening at the steps of the building. And good heavens, who are they? The guests wearing windbreaker jackets reveal themselves as Prince Albert of Monaco and Prince Abdullah of Jordan. The royal guests are holding birch-bark horns and skis from the Finnish brand Peltonen.

It is the 1980s, and Vuorenkylä has a shop, a post office and a village school of 15 pupils. What brings these royals from faraway lands to the tiny village on the edge of the world on a Saturday in 1988? The thrill of speed, the Itä-Häme newspaper reveals on 27 August 1988. Prince Abdullah is a three-time Jordanian champion in rally, while Prince Albert has already participated in the Paris-Dakar rally twice.-

Rally Finland is underway. Princes Albert and Abdullah land on the field of Purri House in a helicopter to watch the special stage of the rally. They are greeted by press photographers and all 15 schoolchildren of Vuorenkylä. Homemade flags of Monaco and Jordan are flying and cameras are flashing.

The Jyväskylä School of Hospitality has made over a hundred litres of salmon soup, which both the royals and the 150 invited guests enjoy.

The royal retinue is being accompanied by Kari O. Sohlberg, chair of the Rally Organisation Committee, and Lieutenant General Ermei Kanninen. In addition to his military career, Kanninen also acted in leadership positions in motor sports over the years and was also an established guest at the Monte Carlo Rally. The Itä-Häme newspaper says that, as he spoke French, Kanninen presented an invitation to the Finnish Rally to Sovereign Prince Rainier of Monaco. However, Rainier sent Prince Albert to represent him.

The exceptional guests also received gifts from their hosts. Press photographer for Itä-Häme Anja Halla says that the Peltonen skis were produced at the Hartola factory in the 1980s. Naturally, the locals want to offer the esteemed guests local products, even if it is summer. Municipal Manager Pölkki hands them the 200th anniversary medals of Hartola, while the chair of the village committee Esko Hokkanen provides them with birch-bark horns. Before the Lempää special stage, the construction of the local Purnuvuori Ski Resort starts with a royal blast of a birch-bark horn. 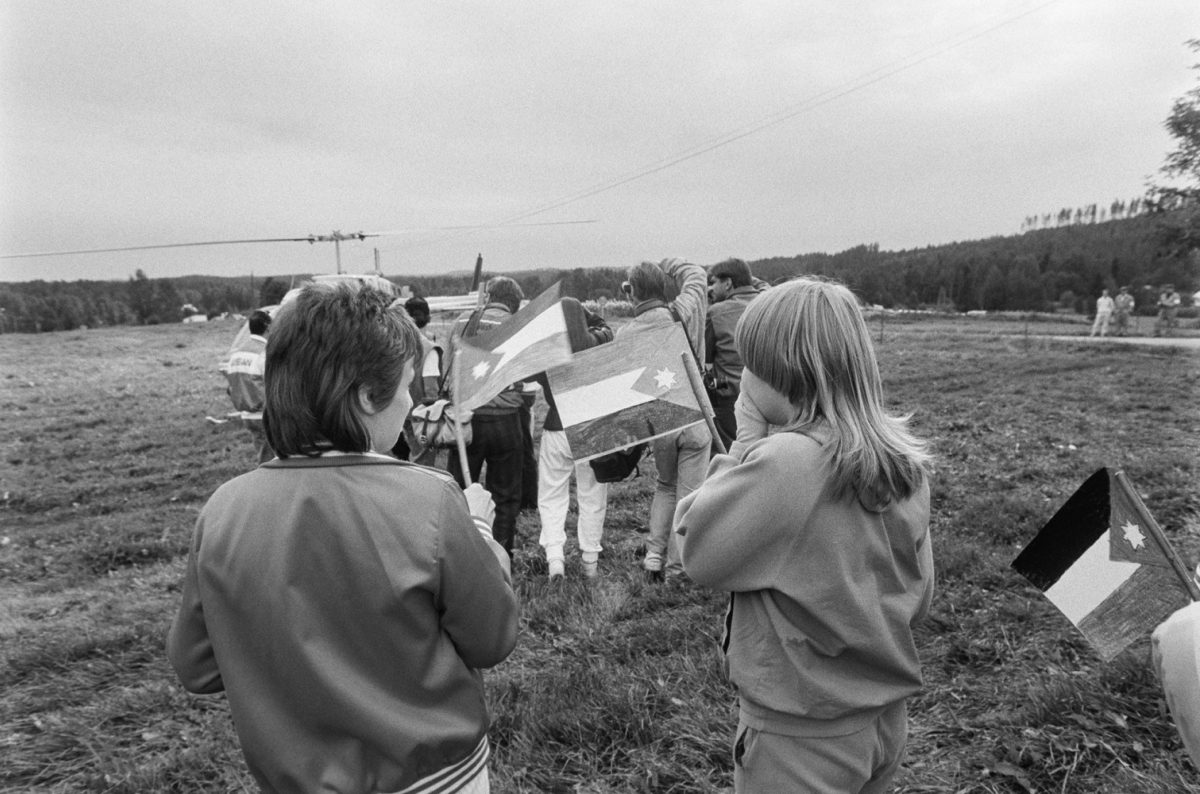 The princes of Monaco and Jordan landed on the field beside Purri House in the village of Vuorenkylä in a helicopter. Girls are waving the flags of Jordan at the royal guests. Photo: Anja Halla / Itä-Häme / Press Photo Archive JOKA (JOKAIH3D8:6) 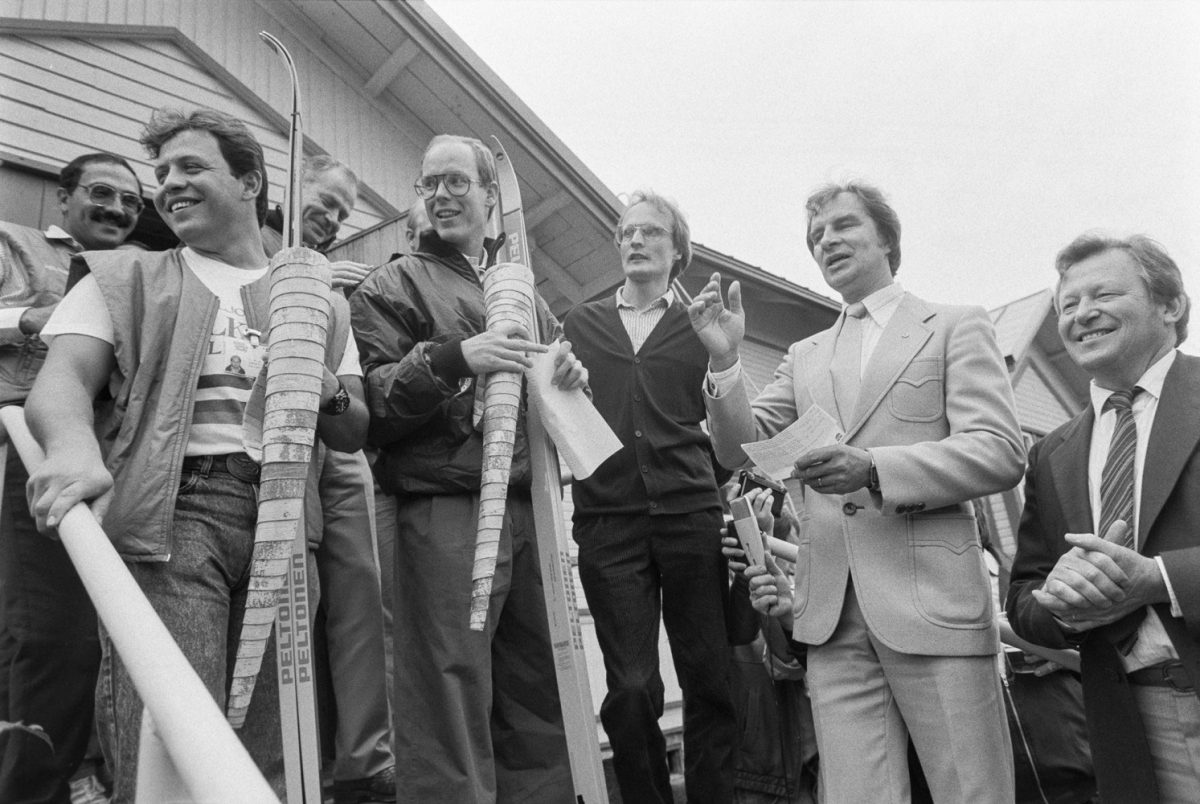 Prince Abdullah of Jordan (on the left) and Prince Albert of Monaco received Peltonen skis and birch-bark horns as gifts on their visit to Vuorenkylä on 26 August 1988 The Municipal Manager of Hartola, Taisto Pölkki (second from the right), is giving a speech to the royal guests. Photo: Anja Halla / Itä-Häme / Press Photo Archive JOKA (JOKAIH3D8:3)

Esko Aaltonen documented the villages and residents of the Suur-Tammela...

Journalists visited the summer camp of female gymnasts in July...