Uuno Peltoniemi photographed life in the border region in the 1930s and 1940s.

When Finland gained its independence, the new government, private citizens and organisations all started to pay more attention to the areas near the Finland-Russia border.
In 1924, the Soldier's Home Association of Finland also started its work in the border region. The association hired educational instructors to visit the Border Guard’s field posts and educate the local civilian populace. The work was initially only carried out in the wilderness area between Lake Ladoga and the Arctic Ocean, but from 1936 onwards the associations’ educational efforts expanded to the Karelian Isthmus as well.

In 1934, the Soldier's Home Association of Finland hired Uuno Peltoniemi (1907–1989) to serve as one of its educational instructors. In addition to his teaching duties, Peltoniemi was also tasked with establishing the border region newspaper, Rajamme Vartija.
The purpose of the newspaper was to serve as a link between border guards and their families and the people living in the border region. The concept proved a success, and the paper became very popular. In addition to articles focusing on history, the national economy, social issues and geography, the paper also published writings and pictures from Border Guard soldiers and the people living in the border region.

Initially, Uuno Peltoniemi travelled from one border guard detachment to the next, traversing the border region with border guards or on his own, on foot in the summer and on skis in the winter.
As an educational instructor, Peltoniemi assisted Border Guard soldiers with their hobbies and promoted independent study, held lessons and presentations, and socialised with both the soldiers stationed at the border and the local civilian populace. While doing so, he also photographed life along the eastern border in the 1930s and 1940s to an exceptionally extensive degree.
In his photographs, Uuno Peltoniemi showcases the eastern border, the characteristics of border parishes, nature, industries, border work and border guards in a richly nuanced manner. In his own words “the stark nature of the shores of the Arctic Ocean and Lapland gives way almost without warning to the tree-covered hills of Kainuu and Karelia in Kuusamo, and further south the shores of Lake Ladoga in Salmi consist of the same kind of flat sands as the famed shores of the Karelian Isthmus.”
Uuno Peltoniemi’s thorough familiarity with the history and conditions of the border region is reflected in his books Rajavartiolaitoksen historia 1918–1939 (‘History of the Finnish Border Guard 1918–1939’) and Itärajan kuvia (‘Pictures from the Eastern Border’). The latter ended up on the list of banned print products after the end of the Continuation War.

In 1990, Uuno Peltoniemi’s picture collection, consisting of over 12,000 photographs, was transferred to the Finnish Heritage Agency.
Peltoniemi included information on subjects and dates of photography on many of the pictures and negative bags himself, which has been a great help in the cataloguing of the pictures. A sampling of the collection is available for viewing on the www.kuvakokoelmat.fi website of the Picture Collections of the Finnish Heritage Agency. 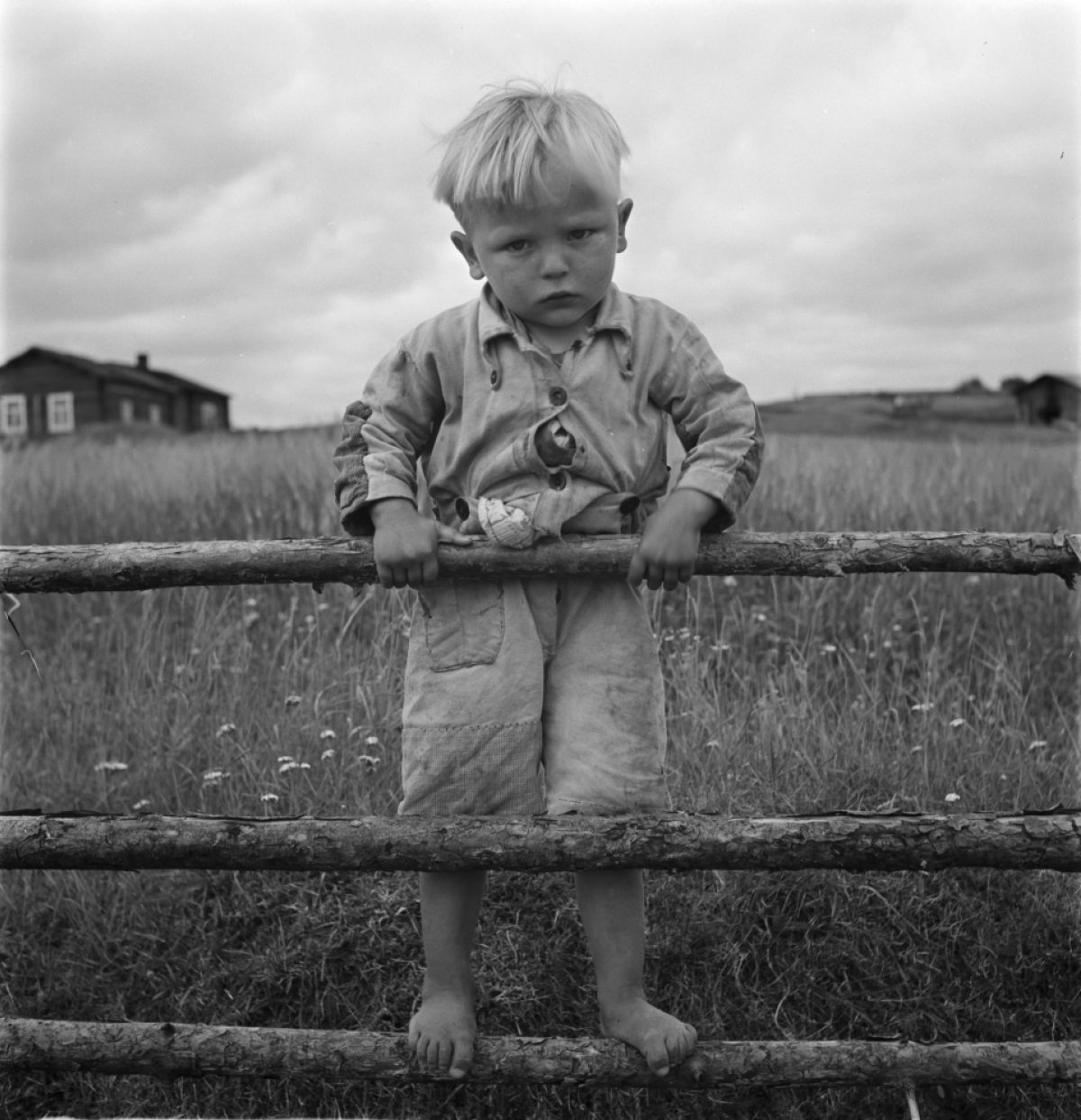 A boy who came to see a bus, standing on a fence in Suomussalmi in 1939. Photo: Uuno Peltoniemi / Picture Collections of the Finnish Heritage Agency (KK5575:1237)