How to Approach a Monument?

Now you have an excellent chance of accumulating our shared knowledge of our cultural heritage sites, creating visual stories of familiar places and introducing less well-known treasures.

Wiki Loves Monuments is an international photography competition, which is being organised in Finland for the first time. The competitors will take photos of the cultural heritage sites in their own countries, and the top ten entries in each national competition will enter the international finals. The Finnish Heritage Agency will archive a selection of these pictures into its collections. Photographs can be uploaded on the competition website until 30 September 2017.

Louhisaari Manor in Askainen is an estate constructed by Herman Fleming in the mid-17th century. The chateau’s design was inspired by Dutch palace architecture, and its halls that were renovated in the 1760s, adding a touch of Rococo flavour, together with their ceiling frescoes are the only reception rooms remaining from the era of Swedish rule in Finland.

After the Flemings, Louhisaari Manor was owned by the Mannerheims until 1903. The chateau is the birthplace of Marshal of Finland C.G.E. Mannerheim. The ownership of the chateau and its surrounding parks was transferred to the state in 1961, after which the Finnish Heritage Agency renovated the building.

The photographic documentation of the 1960s restoration work has been preserved in the Finnish Heritage Agency’s Picture Collections. The photographer was Per Olof Welin (born 1927). He began working as a professional photographer in 1946, first with landscapes and milieus and later specialising in architecture. The Finnish Heritage Agency’s collections contain nearly 10,000 pictures taken by Welin of historical buildings, castles, churches, manor houses and restoration projects.

Welin’s photo of Louhisaari was published in 1968 in the first publication introducing the chateau as a museum. The picture shows its subject from its most impressive angle. A magnificent lane lined with birch trees takes the visitor to the gate and the ceremonial courtyard. Caught by the linear perspective, the visitor must stop at this point, as here the grandeur of the ceremonial courtyard is bound to take the viewer’s breath away, and here the photographer cannot resist the temptation to set their tripod.

This happened to me, as well. As one of the Finnish Heritage Agency’s photographers, I was part of a project that resulted in a comprehensive piece of literature on the history of Louhisaari, published in 2005. And, lo and behold, the picture I had taken standing in that exact spot was on the cover of this book. Signe Brander also took pictures at this same location in 1911, and, perhaps, I was once again allowed to follow in the footsteps of some of the giants in the field!

The authors of the book asked for the first picture to be from a distance and even to have a slightly mysterious approach to the subject. That is why one night in February I found myself in that particular park of Louhisaari which is closest to the sea. I wanted to take a picture, in which the window of the Devil's Chamber on the third floor was lit. The Devil's Chamber is a room decorated in the light-hearted fashion of the 18th century, in which one of the visual themes is the head of a satyr with horns and hair. Because the local population was not particularly familiar with satyrs, they thought that the Devil himself had been immortalised in the Rococo frames.

I left my camera in the park for exposure and went inside. As I was walking in the main staircase, I avoided disturbing the lady of the manor haunting it. My heart skipped a beat as I saw the paintings in the large chamber staring at me from the dark.

Half an hour later I returned to the park and began exposing a new plate. With the help of two torches and a hand-held flash, I took light into the Devil’s Chamber several times. A new visual story of a monument was created. 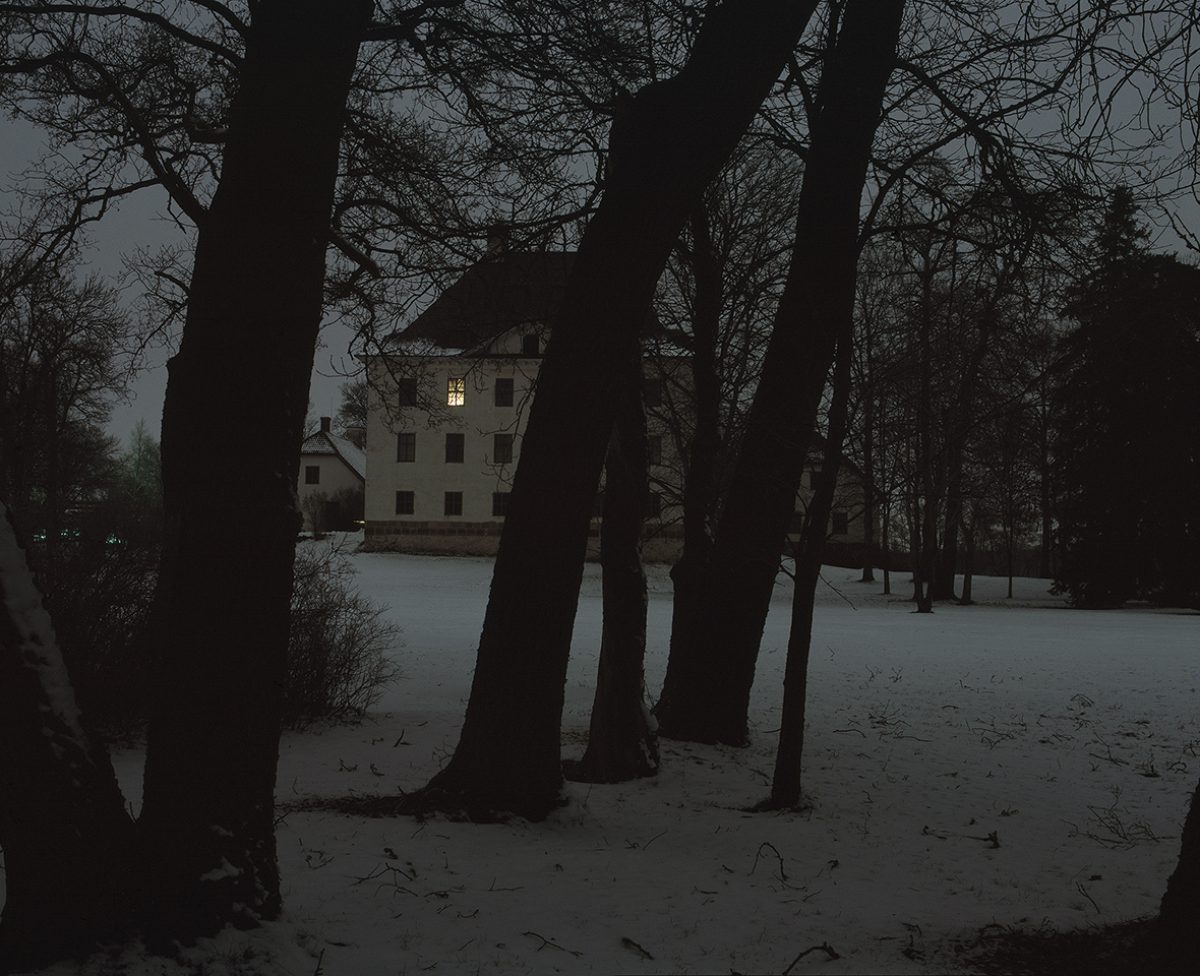