The Helsinki Metro with its many twists and turns

News photographs followed the construction of the Helsinki Metro from the 1960s to the 1980s.

The work of newspaper photographers means rushing from one event to another and photographing a wide variety of events. The many phases of the Helsinki Metro were photographed by the photographers Martti Halme and Jukka Uotila from the newspaper Uusi Suomi, among others.

The City of Helsinki turned 431 in 1981, and the birthday was celebrated with art. The theme of Helsinki Day was the Helsinki of Artists.
Doors were open to exhibitions and workshops, but people flocked to public events in particular: Hyde Park in Espladadi Park, a performance by Ragni Malmstén on the stage in Espladani and free rides on the Helsinki Metro from Hakaniemi to Herttoniemi and from Herttoniemi to Hakaniemi.
The Helsinki Metro had given rise to much debate and turmoil, and it would soon be ready to operate regularly between the centre of Helsinki and East Helsinki.

The chapters in the Metro’s construction had been followed since the 1950s. The planning began in earnest in autumn 1955 when four members of the City Council who represented the Social Democratic Party proposed that a metro system be built in Helsinki.
In March 1965, the much-debated metro project was presented at the Session Hall of the Helsinki City Council. The press conference included speeches by Reino Castrén, Office Manager of the Metro Committee, Lauri Aho, Lord Mayor of Helsinki, and J. A. Kivistö, Deputy Mayor.
Reino Castrén, the head of the Metro Committee, presented the plan, which was divided into three phases. In the first phase, the plan was to build a metro track measuring 15.2 kilometres from Ruoholahti to Kulosaari and Puotinharju via Sörnäinen. From Sörnäinen the track would branch off to the north, towards Kumpula. A high-speed track measuring 5.4 kilometres would simultaneously be built on Mannerheimintie.
The plan was to build a metro track to the west in the second phase and continue onwards from Tapiola in the third phase. The third phase was planned to be completed in 2000. The total length of the metro track at that time would be 75.3 kilometres, with 87 metro stations.

The proposal by the Metro Committee raised many questions, the main one concerning funding. Lord Mayor Lauri Aho pointed out that funding opportunities for the project should be explored further – to make the project possible, the city would require a long-term loan and cooperation with the government and neighbouring municipalities.
The Helsinki City Council decided in 1965 that the plans for the metro system would be launched. When the City Council decided on the construction of the metro track in 1969, Reino Castrén was working as an expert in Kolkata, India, and the position of the director of the Metro Office was assumed by Unto Valtanen (M.Sc. (Tech.)).

Metro traffic in Helsinki was launched on 1 June 1982 on the route Hakaniemi–Itäkeskus. The official opening of the metro was held on 2 August. Soon after the opening, the City Council suspended Unto Valtanen, Director of the Metro Office, from office. Valtanen was suspected of accepting bribes. The aftermath of the Helsinki Metro had begun.
More photographs of the different phases of the Helsinki Metro can be found in the Journalistic Picture Archive. 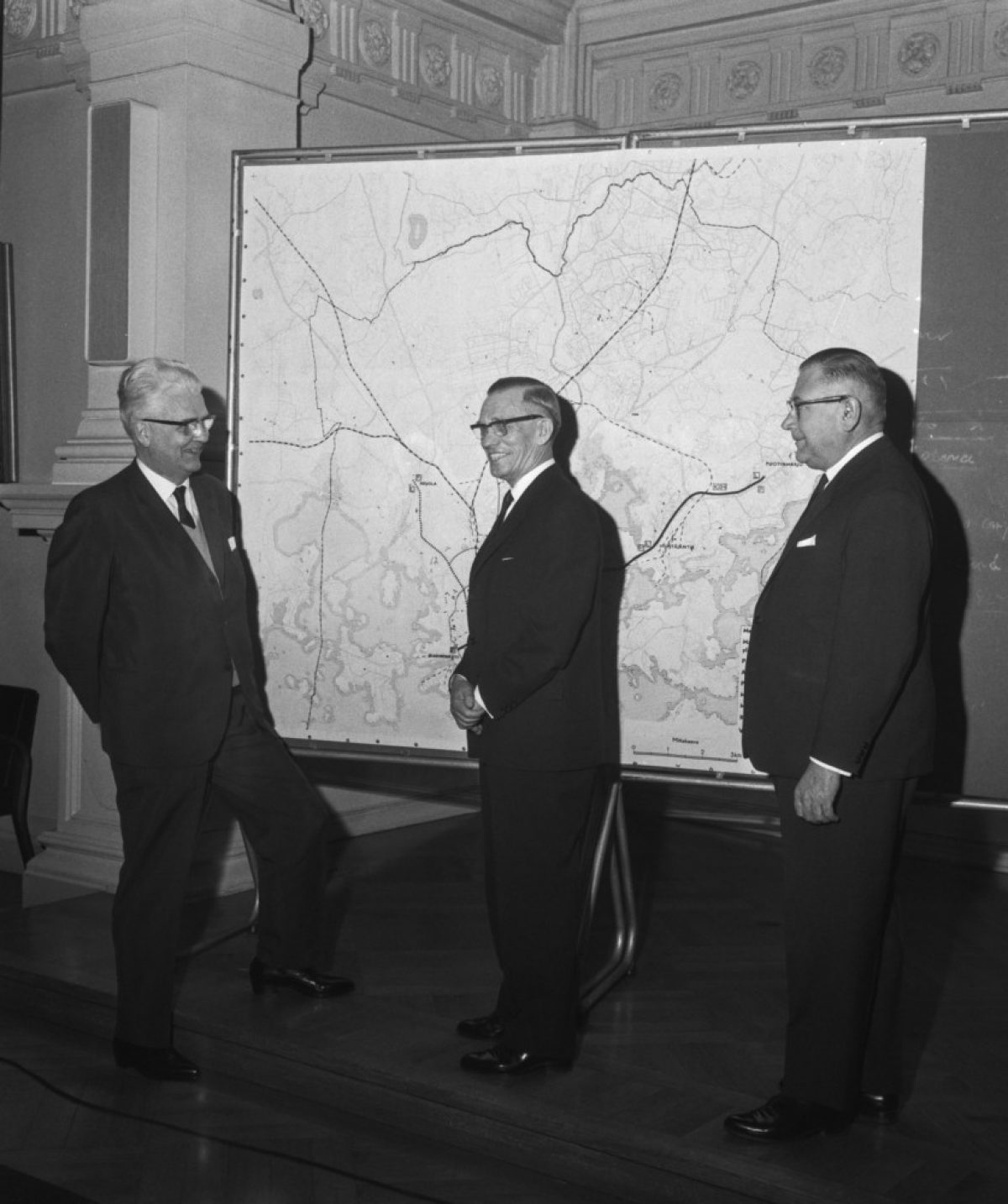