The fair lady from Viena

Inspired by the Pan-European national revival, collectors of Finnish folklore began travelling to Karelia in the 19th century. This movement is linked to a story, which carried this enthusiasm all the way to the 20th century.
The main characters in the story and its illustrations include Ilmari Calamnius (Kianto), I.K. Inha, Sakari Pälsi, A.O. Väisänen and ‘the fair lady from Viena’.
The main events took place in 1896, 1921–1922 and 1942. They were characterised by the unfair and even illegal actions taken by various Russian administrations that were in breach of what had been agreed, the Russification of Finland, the 1920 Treaty of Tartu and the related events, and the war in 1939–1944.
These two photographs are very different but were both taken in Viena, i.e. White Karelia, during the military expeditions from 1918 to 1922.
The main picture was taken in 1918 by A.O. Väisänen, a scholar and a collector of folk music from Finland and other related peoples, while he was travelling to the village of Röhö in Viena. The rider on the right is author Ilmari Kianto, and in the foreground is the group's leader, artist Alvar Kangasmaa, from Helsinki.

The second picture is of an unknown woman from Venetjärvi. Alongside the beautiful, although aging, woman, the photograph is dominated by the burning splint that she is holding. The picture was taken by Sakari Lemmitty Pälsi, a well-known archaeologist, explorer, ethnologist, author and photographer, who later became the director of the prehistorical department in the National Museum of Finland.
Although Pälsi had travelled extensively, he was not familiar with Eastern Karelia before his visit in 1921–1922 as a war correspondent, and he did not always seem to know where he was.
In the winter of 1921–1922, Pälsi travelled to a croft, and it turned out that the owner's wife's family originally came from Oulu and that she was very proud of her heritage. Pälsi realised that this was the beautiful woman that I.K. Inha had previously mentioned.
A young student, Ilmari Kianto, had travelled east in summer 1896 to attend the local patron saint's celebration in Vuokkiniemi. On his trip back home, he had ended up at the Larintalo farm, owned by a cattle merchant from Venetjärvi. Kianto had also met the merchant's wife that I.K. Inha had tried to woo two years earlier.
Pälsi told the woman that Inha was still unmarried. She replied: ‘Always with his nose in the books, never cared for anything else.’
Her arrogance annoyed Pälsi, and he decided to tease her. Being thus rejected verbally, he changed tack to flattery and said rudely to the eldest daughter: ‘Your mother must have been much more beautiful than you when she was younger.’ The woman's husband replied, equally rudely: ‘Very much so.’ Pälsi believed that the husband had learnt a lot about being married to the proud beauty.
Pälsi also included the woman's picture in a book he wrote in 1942 with the caption:
‘Twenty years ago a Karelian woman was free to rule her home, milk her cows and burn her splints for light. Once the oppression, war and exile end, these enterprising women can once more return to their lost realm.’ 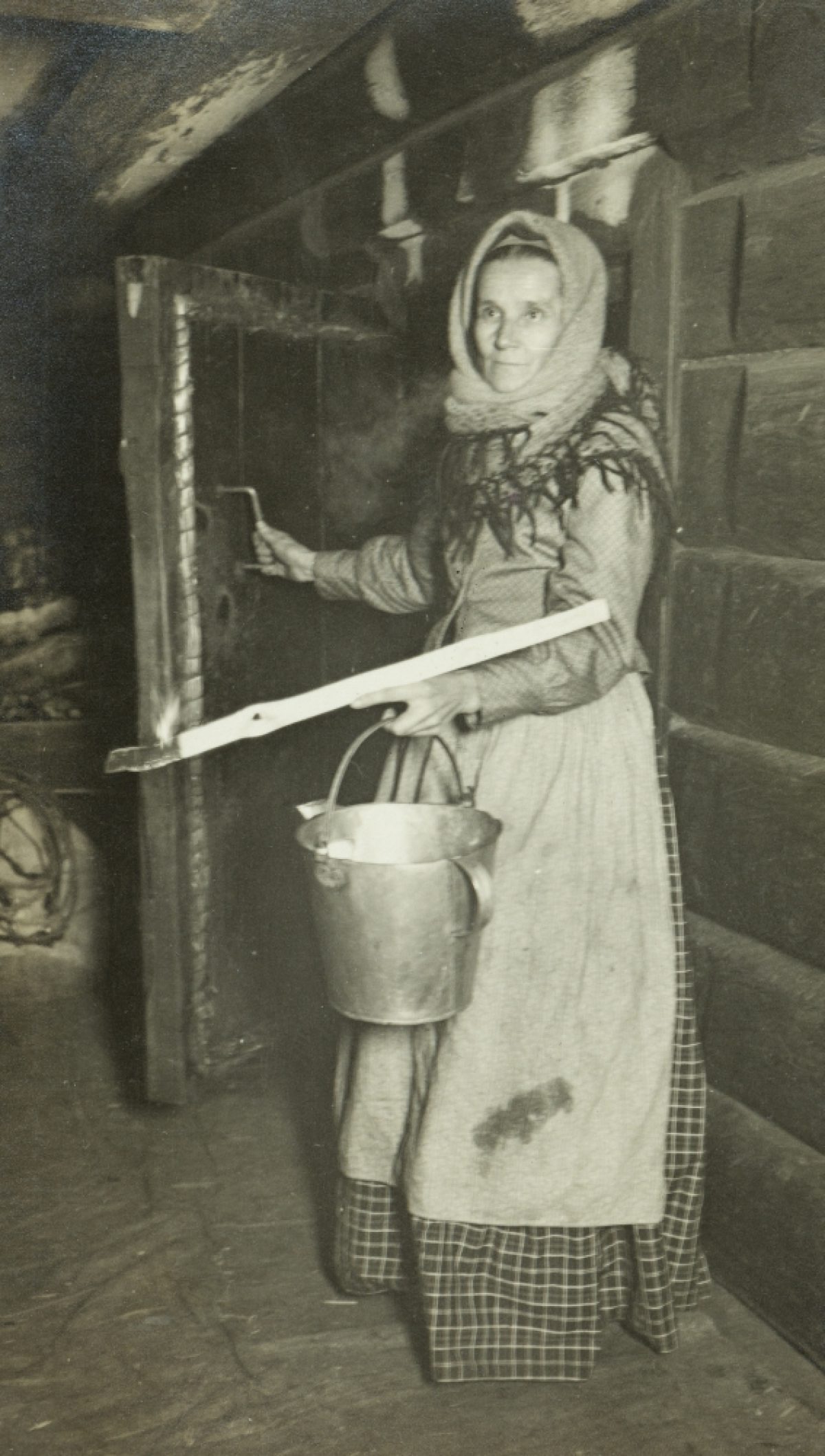 A Karelian woman at the door to her home. Photo: Sakari Pälsi / Picture Collections of the Finnish Heritage Agency (HK7981:147.39A)